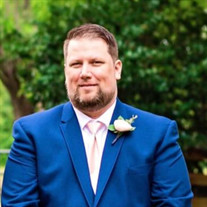 Dustin Morse was a beloved husband, father, son, brother and friend. Of all his accomplishments in life, his greatest was becoming a father. Dustin met the love of his life, Kayla, many moons ago in 8th grade at Standard Middle School in Bakersfield, CA. Neither knew at the time that they would find each other years later, settle down, have a beautiful family and put down roots in Florida. In 2018, after the arrival of their youngest daughter, Brooklyn, the Morse family made the long journey from Bakersfield, CA to Orlando, FL. This move brought many changes, but the most notable was the purchase of Mama Romano’s Italian Restaurant and Pizzeria in Kissimmee, FL. Dustin became a master chef (which is pretty amazing considering he couldn’t boil a pot of water). He was a brilliant business owner with a natural charm and charisma that brought great joy to his many employees and patrons over the years. Known as the hardest worker his family and friends had ever seen, if Dustin wasn’t putting in long hours at his restaurant, he was enjoying family time. Next to his wife and children, his greatest passion in life was fishing. He could drop a line in any body of water, big or small, and his spirits were instantly lifted. You’d often find him on his dock with one or all of his children, trying to get a bite. He enjoyed trips to the beach with his family, or a night at the arcade when he could. Their love of arcade games was something he and Lucas bonded over from a young age. To Lucas, his daddy was his hero. His voice was stern and full of structure, but his touch was gentle and his children always felt his love. Some of Dustin’s greatest loves in life included God, his Country, and sports. A walking almanac, he could tell you anything about any sport during any era in time, as well as any pivotal moment in World and American History. If the White Sox we’re losing, he was watching. He cried the day Phillip Rivers retired from the Chargers, and he lived to see the day the Orlando Magic might make it to the playoffs. If he lacked in anything, it was his taste in sports teams. Dustin is survived by his loving wife, Kayla and three children: Sammi (14) Lucas (7) and Brooklyn (3). Mom Michele Liskiewicz of Stockton, CA, Father Joe Liskiewicz of Cleburne, TX, Brother Levi Liskiewicz (Nhan Tran and daughter Addison) of Phoenix, AZ, Sister ShelbyJo Liskiewicz (nephew Vincent and niece Skylee) of Stockton, CA, and countless family members and friends. His closest friends were like his brothers, and each of you know who you are! Never forget the love he had for his friends. They were his world. Our family would like to personally thank the Pizzi Family, Matthew Billington, Shaun Hopf, and the amazing Nurses, Doctors and Medical staff of Orlando Regional Medical Center, who saw Dustin and family through the last month of his life. After a month long battle and hospital stay, Dustin was taken from us due to COVID-19. If there’s one thing our family hopes to take from this tragic loss of our husband and father at the young age of 35, it’s that people take COVID as a serious issue. Despite his young age, his body was not strong enough to win this battle, and we hope that less and less people will have to experience a loss like this when necessary precautions are taken. They say when you meet the love of your life, time stops, and that's true. What they don't tell you is that when it starts again, it moves extra fast to catch up. The last eight and a half years spent with my beautiful husband flew by quicker than imaginable. We will forever cherish and honor your memory. We love you more today than yesterday, but less than we will tomorrow.

Dustin Morse was a beloved husband, father, son, brother and friend. Of all his accomplishments in life, his greatest was becoming a father. Dustin met the love of his life, Kayla, many moons ago in 8th grade at Standard Middle School in Bakersfield,... View Obituary & Service Information

The family of Dustin Morse created this Life Tributes page to make it easy to share your memories.

Dustin Morse was a beloved husband, father, son, brother and...

Send flowers to the Morse family.