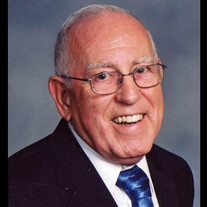 Donald Gene Holt (87) passed away peacefully of natural causes early in the morning of Monday, April 4, 2022, in his home in St. Cloud, Florida, that he shared with his wife of 64 years, Jo Ann Holt (Barrow). Born in East St. Louis, Illinois, in 1934, Don was the only surviving child of Bernard Dwight Holt and Nova Genevieve Holt (Rehfeldt), as both his brother, Bernard, and sister, Carmen, died early in childhood. He attended both Southern Illinois and Stetson University, and went on to become a Southern Baptist minister, like his father before him, leading churches in both Southeast and Southwest Florida. Later in life he leveraged his extreme kindness and ability to connect with people to work in retail at J.C. Penney, finishing his career with a decade-long, part-time job at Walt Disney World’s Downtown Disney (Once Upon a Toy), following his initial “retirement” and move to Central Florida. Don never shied away from helping others, whether it was a member of his congregation needing faithful counsel, a neighbor needing a helping hand, a co-worker needing an extra moment of his time off the clock, or a child discovering how to construct a custom lightsaber or a Mr. Potato Head. Yet, he always prioritized and cherished his time with his family, cheering his children on in whatever way he could and keeping romance alive since his marriage to Jo Ann in 1957. All he ever asked for in return was true fellowship, and he always beamed at holidays or any excuse for a family get-together with his children, grandchildren, spouses, and extended family, especially if he could fire up the grill or sneak in a bite of any dessert for his legendary sweet tooth. He loved a good movie, a family game of miniature golf, reading his morning paper (including the Funnies), and family visits to Disney. A beloved husband and loving father, grandfather, and great grandfather, he is survived by his wife, Jo Ann Holt (St. Cloud, FL), his 4 children, son Donald Travis Holt (& Melissa) of Buzzards Bay, MA, daughter Kimberly Gail Holt of St. Cloud, FL, son Daryl Alan Holt (& Sarah) of Lake Mary, FL, and daughter Angela Michelle Tileston (& Mike) of St. Cloud, FL, his 6 grandchildren (Christopher Holt, Stefanee Holt, Bryan Tileston, Jaidyn Holt, Jacob Tileston, and Austin Tileston), and his 4 great grandchildren (Logan Holt, Levi Holt, Reilly Bradley, and Ninoshka Holt). An intimate memorial service will be held at Osceola Memory Gardens Cemetery on Monday, April 11th, at 11:00 a.m. (1717 Old Boggy Creek Road, Kissimmee, FL), following a viewing ceremony with family and friends the evening before on Sunday, April 10th, from 5:00 p.m. to 8:00 p.m. at Osceola Memory Gardens Funeral Home (2000 13th Street, St. Cloud, FL).

Donald Gene Holt (87) passed away peacefully of natural causes early in the morning of Monday, April 4, 2022, in his home in St. Cloud, Florida, that he shared with his wife of 64 years, Jo Ann Holt (Barrow). Born in East St. Louis, Illinois,... View Obituary & Service Information

The family of Donald Gene Holt created this Life Tributes page to make it easy to share your memories.

Send flowers to the Holt family.