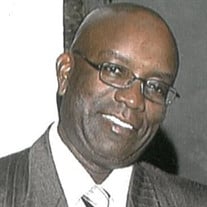 Mr. Delroy Hugh Powell Sr., who left us unexpectedly on Sunday, March 27th, 2022, was born on August 27th, 1952. He was born in the town of saint Simon formerly Haughton court in the Parish Hanover, Jamacia to Joseph H. Powell and the late Emeline F. Powell. Delroy, affectionally known from a child as “plumber” spent the early part of life growing up living on a 10-acre farm with his parents and brothers and sisters Ferrest, Thelma, Danny, and Keith. As a teenager Delroy attended trade school in Lucy, Jamaica, learning the automotive trade. By 1970 he was sponsored to go to Boston Massachusetts where he joined mother to continue his automotive education in the United States. Delroy Sr. proved to be an astute student graduating with an automotive certification from O.I.C. Trade school. From there Delroy Sr. gained employment at Middlesex Truck and Coach on Bishop Allen drive in Cambridge, Ma. He started as an auto mechanic apprentice where his passion for auto repair led him on a career path that would last for over two decades. At New England truck and auto in Avon, Ma. Delroy Sr. worked as the lead truck painter and body worker. During the start of his career Delroy had a love for cars and he purchased a green Pontiac Firebird that he named “Betsy” which became a trademark vehicle for the young Jamaican man. Delroy’s reputation grew as a witty comedian who had an infectious spirit and loved Jamaican food, music, and spirits. Not to mention his love for women. In 1973, a few years into his career Delroy Sr. had two boys, Desi and Delroy Jr. and five years later he would have his first Daughter Dashann. Years later Delroy Sr. would leave New England Truck and Auto to be an entrepreneur and work as owner operator at Western Ave Auto body in Cambridge Ma. where he also called home made a huge impression on the community as a father and local mechanic. He would go on to provide automotive services to the community, family and friends as his generosity saw no bounds using the skills from over the years. As well as hosting multiple Christmas parties and family gatherings. Delroy proved to be the life of the party. In 1988 he had his fourth child Sasha. Unfortunately, Delroy’s career was cut short by a genetic eye disease, (Retinitis Pigmentosa’s) and he was forced to retire from the automotive trade eventually bringing him to sunny Florida. Which intern would be his final resting place. Delroy leaves behind children Desi Ali Powell Sr. of Woburn Ma., Delroy Hugh Powell Jr. of North Carolina, Dashann Ayia Powell of Davenport Fl., and Sasha Griffith of Cambridge Ma. Five grandchildren Desi Jr., Shaolin, Summer, Sacadi, and Noel. Father Joseph Powell of Kissimmee Fl. Ferest Powell, Thelma Johnson of Hopkinton Ma., Danny Powell Sr. Of Cambridge Ma., and Keith Powell of saint Simon, Jamaica. A visitation will be held on Thursday, April 7, 2022 from 5:00 pm to 8:00 pm at Osceola Memory Gardens Funeral Home - Poinciana Chapel, located at 3175 Pleasant Hill Road, Poinciana, FL 34746. He will be laid to rest on Friday, April 8, 2022 at 12:00 pm at Osceola Memory Gardens Cemetery, 1717 Old Boggy Creek Road, Kissimmee, FL 34744. Funeral services entrusted to Osceola Memory Gardens Funeral Home & Crematory, 3175 Pleasant Hill Road, Poinciana, FL 34746 - Phone: 407-931-4811 - For online condolences please visit: www.OsceolaMemGds.com

Mr. Delroy Hugh Powell Sr., who left us unexpectedly on Sunday, March 27th, 2022, was born on August 27th, 1952. He was born in the town of saint Simon formerly Haughton court in the Parish Hanover, Jamacia to Joseph H. Powell and the late Emeline... View Obituary & Service Information

The family of Delroy Hugh Powell Sr. created this Life Tributes page to make it easy to share your memories.

Send flowers to the Powell family.