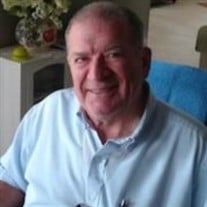 Charles T. Merrill, resident of St. Cloud Florida and Detroit Michigan area, passed away February 5, 2022 at 83 years old. He was born on September 13, 1938 to Charles and Hannah Elizabeth (Johnson) Merrill in Grosse Pointe Farms, MI. Chuck, as friends called him, was married on June 4, 1960 to the love of his life, Cecelia (Trombley) Merrill at Eastlawn Missionary Church in Detroit, MI. They loved each other and held true to their vows for almost 62 years. Chuck is survived by his wife, Cecelia, Sons David (Dorothy), Ron (Rene) and Mike (Stacy). His Grandchildren still living are Joshua (Sarah), Jeremy (Rebekah), Mercedes, Paige, Jaimee, Harrison, Ian (Maddi), Kaitlyn and Joelle and 5 great grandchildren: Scarlett, Sadie, Jamison, Shelby and Avery. He is also survived by his Sister Nancy (Martin) Mikelson. Chuck was preceeded in death by his Mother and Father, Sister Carol (Jim) Elbode and Jacob one of his grandchildren. Chuck was an enthusiastic sports fan. Every baseball game required a program where he would keep score meticulously and thoroughly enjoy every moment. In later years, Chuck could be found attending every baseball or soccer game his Grandson’s played in that he could. And yes – keeping stats on them as well. He was stricken with polio as a teenager that debilitated his left leg which took away his ability to play sports himself. However, that didn’t keep him from playing fast pitch softball for the Church and Company teams – he just had to have the pinch runner after he got to first. Dad was a pitcher and boy did he have a wicked knuckle ball and curve. Dad didn’t miss any chance to coach any sport we were in… Baseball, Football, Soccer (no basketball though) Chuck was the guy who gave of his time, volunteered, brought others in to share the fun, offered to give people rides, and just helped whenever and wherever he could. He served the churches he attended as Christian Education Director, and again kept everything in line. After all – he was a detail draftsman and design checker for Ford Motor Company, Burroughs and Kelvinator Appliances during his working years. The number of Christmas programs Chuck oversaw at Church thru the years must hold some kind of record somewhere. Getting the kids from the nursery thru HS to participate in telling the story of Jesus Birth and God’s plan for salvation. He also participated in the Choir, lead worship when asked - and loved belting out songs from the old hymnal like: “He Lives”, and “Wonderful Grace of Jesus”. Chuck and Cecelia found the joy of Brown City Camp – a Church Family camp run by the Missionary Church in a corn field in the middle of the thumb of Michigan and Dad threw himself into it. He volunteered at the welcome booth making sure, once again, that everything was in order, all guests registered and equipped with the camps activity brochure. He even plotted every lot in the camp on his CAD system at work after hours and had every lot owner listed. He loved Brown City. So, Chuck was a giver, a servant, and most importantly a Man who loved God and his Family. He had devotions every day and used the Daily Bread as a guide for as many years as we can tell. He accepted Jesus as his Savior and is now at peace with a new body in Heaven. We can only guess at how much he is enjoying being free from polio. And the joy he experienced when he took his last challenging and painful breath on earth, his next breath was in Heaven in the presence of his Savior, Jesus who welcomed him and told him – Chuck, well done good and faithful servant. (Then Chuck asked Jesus where the heavenly football field was so he could go join old friends in a pick up game) Dad we will all miss you. Thank you for showing us the way everlasting. We love you. Services for Mr. Merrill will be held on Saturday, February 26th, 2022 beginning at 11:00 AM at the Eastern Avenue Baptist Church in St. Cloud with Pastor Martin Mikelson officiating.

The family of Charles T Merrill created this Life Tributes page to make it easy to share your memories.

Send flowers to the Merrill family.