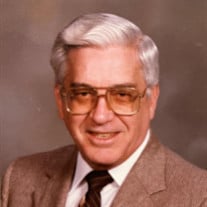 Not sure what to send?

Charles J. Faraci, formerly of Kansas City, Kansas and more recently Melbourne, Florida, passed away peacefully on September 5th, 2021 at the age of 93. Charles was born July 6th, 1928 in Clifton, New Jersey to Frederick Faraci and Rose Genthon who preceded him in death along with his brothers Rick Faraci and Gene Faraci. Charles enlisted in the army as a teenager where he was trained in artillery and missiles. As a result of his hard work and dedication he went from an enlisted man to an officer, retiring after 23 years with the rank of Major in the US Armed Forces. On his first tour to Germany, he and his then wife, Marian (deceased) adopted a son named Frances Michael, then on the second tour added a daughter, Joanne “Jo” Elizabeth. Charles spent much of his life, after retiring in Kansas City, Kansas. There he found the “love of his life” (his words), Jean, along with her four children, Dennis Stolte (deceased), Jim Stolte, Sherl Childs and Victoria Fowler. 11 grandchildren and 12 great grandchildren. That union lasted for 41 years until September 5, 2021. After retiring together with his wife Jean, they enjoyed many trips with Military buddies he served with throughout his career. They loved to travel and entertain. Charles’ favorite thing to do was bowl. He and Jean enjoyed bowling on a league together for many years. Still holding a 156 average at 93 shows the love he had for the sport and the community of friends they made through the years. Charles was known by all as a bit of a jokester and made many people laugh. He was a much loved husband, father and grandfather. It was his desire for his body to be donated for the advancement of medical science and was his hope for the betterment of future generations. A memorial Mass will be held in his honor at Ascension Catholic Church located at 2950 N. Harbor City Blvd. in Melbourne, Florida 32935 on Saturday, February 12, 2022 at 1pm.

The family of Charles J. Faraci created this Life Tributes page to make it easy to share your memories.