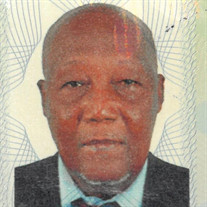 Byron, brother Byron as he was affectionately called, was born on January 13, 1935 to Reginald and Luna Phillips in the parish of Portland Jamaica WI. He was one of five children. His parents and two eldest sisters, Gwendolyne (Terry) and Enid predeceased him. Clearly he was the only male in the family. A fact that he never failed to remind family, friends and foes of. He was the man, the Prince, the heir apparent. Like most children in the Parish, Byron attended Buff Bay Primary School. He was a bright child with a love for mathematics. At a very early age he began to display remarkable writing skills. After leaving school these skills served Byron very well Indeed. His first job was in the Banana Exportation Industry, as head of the payroll department. Later he joined the Jamaica Railway Corporation and worked in several parishes. Highgate in St Mary, Mile Gully in Manchester, and the head office in Kingston, where. as he would say, he blossomed and bloomed in the payroll department. His work was impeccable and he made sure that everyone in the organization knew that. Byron wanted to take his skills internationally, thus he migrated to the USA in 1964. His quest for greatness landed him at American Express, and with hard work and a tenacious attitude he became one of their authorising officers. After a number of years he embarked on one of his greatest ambitions, he left the job and opened his own business. Yes, he finally became the businessman he always wanted to be. He could transfer his skills to his staff and as he would say, watch them work while he put his feet up. Byron was married twice. He joined his second wife, Lolita, in Canada and lived there for a number of years. As a retiree he would spend time in Jamaica and the USA. While visiting his nephew Colin in Kissimme, Byron suffered a heart attack and went to his eternal home on April 23rd 2021 He leaves to mourn, his children: Evarod and Heather, Grandchildren: Danielle, Raymond, and Ryan, five Great grand children Sisters: Leonie (Sister Rose) and Rhena, affectionately called Aunt Rhena. Nephews: Collin, Maurice, and Frank. Nieces: Heather, and Marlene . Grandnieces, cousins, and a vast number of extended family members globally. May his soul rest in Peace and light perpetual shine upon him.

Byron, brother Byron as he was affectionately called, was born on January 13, 1935 to Reginald and Luna Phillips in the parish of Portland Jamaica WI. He was one of five children. His parents and two eldest sisters, Gwendolyne (Terry) and Enid... View Obituary & Service Information

The family of Byron Nathinal Phillips created this Life Tributes page to make it easy to share your memories.

Byron, brother Byron as he was affectionately called, was born...

Send flowers to the Phillips family.