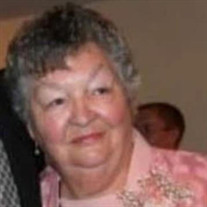 Billie Ann Curtiss Salie, age 88, of Rockledge, Florida passed away on Monday, January 31, 2022. She was born in Harpursville, New York on February 5, 1933 to Wallace and Carolyn (Peg) Curtiss. Billie married Roger Salie in 1954. Billie left Binghamton, New York and moved to Indian Harbor Beach, Florida in 1957, where she and Roger hand-built their home. She was a registered nurse and loved working on many different wards at several hospitals in Florida, North Carolina and Tennessee. Billie loved to camp and travel with her family. She visited many campgrounds and national parks in the United States including an extended camping trip to the Grand Canyon. Her travels took her to China, Korea and Germany and included cruises to the Bahamas, Alaska and a trans-Atlantic cruise to Spain. Billie took several “bucket-list” trips which included visiting family members in Hawaii and a 10-day adventure to Brussels, Belgium and Amsterdam. Billie was a dedicated Girl Scout Leader. Anyone that knew Billie knew that she was a sports enthusiast. She loved watching baseball, basketball and was an avid Florida Gator football fan. She was a beloved wife, mother, grandmother and great-grandmother. She is survived by her husband, Roger, children Terry (Bruce), Lori (Walter) and Craig (Marilyn). Additionally, she is survived by seven grandchildren and twelve great-grandchildren. Donations in Billie’s name may be made to the Lions Eye Institute, 1410 N 21st Street, Tampa, Florida 33605. Arrangements are under the care of Osceola Memory Gardens Cemetery, Funeral Home and Crematory, 1717 Old Boggy Creek Road, Kissimmee, FL 34744. 407.847.2494. www.osceolasmermgds.com

The family of Billie A. Salie created this Life Tributes page to make it easy to share your memories.

Send flowers to the Salie family.