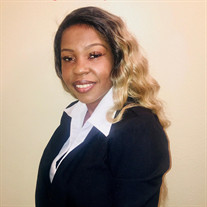 Barbara Brown was a caring and selfless mother, daughter, sister, aunt and friend who was loved by many. Barbara, better known to family as “Sugar Brown” for her deliciously sweet cooking, was born Barbara Natalie Brown to parents Valda and Claude Brown on Saturday October 9, 1976 in St, Ann’s Bay hospital in Jamaica. Though Barbara was an identical twin to sister Beverly Brown, whom she shared a special bond with Barbara had a distinctly different personality from her sister. Barbara was a quiet child who enjoyed going to school and attending church. She was a homemaker and a caretaker from an early age. She always took pleasure in cooking, baking, and hospitality. She often baked traditional Jamaican treats on Sundays for her parents. Barbara liked to endure that the home was clean and a good home-cooked meal was always available for the family. Barbara gave generously of her time and support to help others. In the last years of Barbara’s life, she became the main caretaker and advocate for her twin sister, Beverly until she passed away in January of 2021. She was always by her side and dedicated to her wellbeing, all while fighting through her own health challenges. Barbara also became a full time caretaker for her parents. She was resilient and remained dedicated to taking care of her family. Barbara moved to America in 1995 along with her twin sister and parents to live with her older sister Sharon in Florida. Barbara eventually made a life of her own and had one child, Monique Brown, who she loved dearly. The two were always inseparable, as they had a very special mother-daughter bond. Professionally, Barbara began her career in customer service and then became a life insurance agent. Barbara is survived by daughter-Monique Brown; Parents, Valda & Claude Brown; Siblings-Sharon Harvey, Garfield Lawson, Mark Bennett, Marcia Brown Moody, Michael Brown, and Carol Brown Henry; Nieces and Nephews-Christopjher, Chelsea, Samuel Jr., Andre, Marsha-Lee, Garfield Jr. Cayon, Otis, Romaine, Damaine, Cavon, Ebony, Sydney, Blaine, Nasheaka, and Serena; Brothers in Law- Samuel and Everton; Sisters-in-Law- Carvel and Tracey; Cousins and extended family; Best friend- Michelle and friend, Tim Alexander. Barbara will be remembered as loving, strong and a child of God. We leave you today with a scripture that summarizes Barbara’s transition to the next life: Luke 23:43- “And he said to him,”Truly I say to you, today you will be with me in Paradise.”

Barbara Brown was a caring and selfless mother, daughter, sister, aunt and friend who was loved by many. Barbara, better known to family as &#8220;Sugar Brown&#8221; for her deliciously sweet cooking, was born Barbara Natalie Brown to parents... View Obituary & Service Information

The family of Barbara N Brown created this Life Tributes page to make it easy to share your memories.

Barbara Brown was a caring and selfless mother, daughter, sister,...

Send flowers to the Brown family.