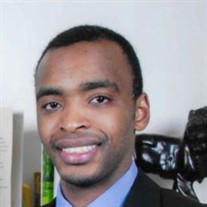 On October 6, 1994 at 9:57PM, in Troy, Michigan, the Lord blessed Godson and Levern Nasari with their third child, a beautiful baby boy. They decided to name him, Baraka Michael Nasari which reflect how much they love him. In Kiswahili, Baraka means “blessings” and Michael means “gift from God”. As a child, Baraka was a curious and intelligent little boy. He was baptized at an early age at the Conant Gardens Seventh-day Adventist Church in Detroit, Michigan. Baraka was a member of the Conant Cougars Pathfinder club and drum corp. He also enjoyed serving as a Jr. Deacon and singing in the choir, “Voices of Praise. His favorite hymn is Deeper Yet. Some of the songs that he enjoyed singing and listening to were Halleluiah, It’s not over (When God is in it), Break every Chain and All of me. Baraka graduated with honors from Troy High School. He participated in various activities in school. He played soccer, ran track and field as well as cross country. He continued his education by obtaining a BA in Political Science from Washington University in St. Louis, Missouri. While at Washington University he was a member of the debate club and mock trials. He later received a Juris Doctor (JD) from Columbia University in New York. He successfully passed the NY bar exam immediately after graduating from law school. His work experience includes a Former Internship at Wayne County Prosecutor’s office in Detroit, Michigan. In addition, he worked as a Former Managing Editor at Serpents of Madonnina. His responsibilities included servings as a blog journalist for his favorite soccer team, Internazionale Milan (Inter Milan) based out of Milan, Italy. He was very passionate about soccer but especially for that club. Baraka’s passion for the sport and team was the reason his brother Imani became a passionate fan of the sport as well to this day. Baraka’s first job as a Judicial Law Clerk was with the law firm of Hogan Lovells US LLP. His most recent employment was at Dechert LLP. Both firms are in New York City.

On October 6, 1994 at 9:57PM, in Troy, Michigan, the Lord blessed Godson and Levern Nasari with their third child, a beautiful baby boy. They decided to name him, Baraka Michael Nasari which reflect how much they love him. In Kiswahili, Baraka... View Obituary & Service Information

The family of Baraka Michael Nasari created this Life Tributes page to make it easy to share your memories.

Send flowers to the Nasari family.