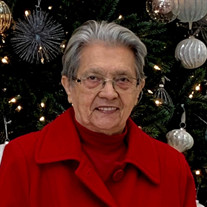 Aurelina Torres Gonzalez, known to many as “Nina” passed away on Saturday, November 20, 2021 at the age of 77, surrounded by her loving family. Nina was the oldest of 14 children, she was born in Jayuya, Puerto Rico on May 18, 1944 to the late Felix Torres and Aurea Gonzalez. Nina is survived by her daughter Aurea Sanchez and son-in-law Edwin, her daughter Amarilys Nieves Torres, her son Orlando Castellar and daughter-in-law Anita; her beloved four grandchildren Adair Maria and Edwin Orlando Sanchez; Maiah Karina and Nando Jael Castellar, all of Orlando, FL. Also, nine siblings: Iris, Norberto, and Maria of Tampa, FL; and Rafael, Antonio, Jose Amilcar, Maribel, Jorge, and Rosa Hilda of Jayuya, Puerto Rico; as well as a host of nieces and nephews to whom she was like a mother. Nina was preceded in death by her sister Hilda Rosa, and brothers Javier, Felix, and Carmelo. Nina will be greatly missed, but she leaves us with unforgettable memories. She will be put to rest at the convenience of the family at Osceola Memory Gardens Cemetery, 1717 Old Boggy Creek Rd.; Kissimmee, FL 34744.

The family of Aurelina Torres Gonzalez created this Life Tributes page to make it easy to share your memories.

Aurelina Torres Gonzalez, known to many as “Nina” passed away...