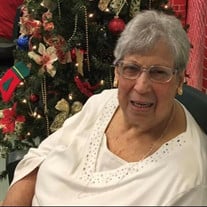 Amanda Reyes On the morning of February 25, 2022, at the age of 94, Amanda Reyes passed from this world to meet her Lord and Creator surrounded by her family. Amanda was born in Santiago de Cuba, Cuba. The middle child of Theodosio and Delfina Echevarria. She came to the United States at the age of 20 in 1947 accompanied by her older brother to search for a better life for herself and her family. Her mother, father, sister and grandmother stayed behind but quickly joined them as both Amanda and her brother had jobs. Amanda worked in a hat factory which was ideal as she loved fashion. She was always impeccably dressed and looked stunning. The family lived in the Bronx, New York in a tightknit Cuban community. There she captured the eye of Pablo Reyes who had also come from Cuba in 1949. He was from a different part of Cuba and quite possibly would never have met had they not ended up in the same little neighborhood in the Bronx. Pablo and Amanda were married in 1953 and their love story continued until his early death in 1992. Pablo worked for the City of New York as a house painter and Amanda was a devoted homemaker. They lived the American dream finally buying a house in 1966 in Queens, NY where they raised their three children, Son Pablo Reyes (Minerva), Daughters Marissa Mayo and Sandra McCloud (Vernon). She is preceded in death by her son-in-law Thomas Mayo, Jr. Amanda was a loving mother and wife. She was passionate about her family. When additional family needed to escape the tyranny in Cuba, she and Pablo opened their home to his sisters and families to help them get established in the US. Amanda was a doting abuelita to ten grandchildren: Lisette, Lamisha, Pablito, Bill, Amanda, Kendra, Michael, Kendrick, Juan and David. She savored her time with her ten great-grandchildren and was a beloved Aunt as well. In 1989 Pablo retired and they moved to Kissimmee, Florida were their two oldest children lived. Unfortunately, their plans for retirement were shattered with Pablo’s early death. But Amanda was able to find joy when she became an active member of the Osceola Council on Aging. She made many friends and loved her time there. She traveled with them and was able to enjoy her golden years accompanied by some wonderful people. She was a member of the Red Hat Society donning stylish hats as she did in her younger years. She moved to Oak Leaf Landings in 1998 where she continued to make friends and be active in the building’s social activities. She was the bingo caller for several years, and we can honestly say that she was loved by all in her building. She always thought of others and always had a kind word for anyone and all who needed it. She was an inspiration to so many people and touched so many hearts. Amanda leaves a legacy of deep devotion and love for her family and dear friends. Visitation will be on Friday, March 4th from 5 PM to 9 PM at Osceola Memory Gardens Funeral Home, Kissimmee Chapel, 1717 Old Boggy Creek Road, Kissimmee, FL 34744. Funeral Service on Saturday, March 5th at 11 AM also be at the Osceola Memory Gardens Funeral Home. There will be a short reception following the service.

Amanda Reyes On the morning of February 25, 2022, at the age of 94, Amanda Reyes passed from this world to meet her Lord and Creator surrounded by her family. Amanda was born in Santiago de Cuba, Cuba. The middle child of Theodosio and Delfina... View Obituary & Service Information

The family of Amanda Reyes created this Life Tributes page to make it easy to share your memories.

Send flowers to the Reyes family.