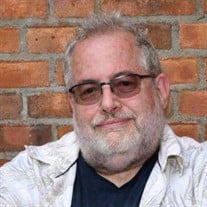 Alfred Frank D’Alfonso Jr. (Formerly of Waterbury) Alfred Frank D’Alfonso Jr., 62, passed away unexpectedly March 18, 2022 in Kissimmee, FL. He was the husband of Angela Costantino D’Alfonso; they shared almost 40 years of marriage together. Al was born in Waterbury, CT to Alfred and Rosemary (Bordner) D’Alfonso. He graduated from Bunker Hill Elementary School and Kaynor Tech High School. He moved to Florida in 1987, where he received an A.S. degree in business from Valencia College. Al worked as a General Manager for General Cinema Corporation, and later, Regal Cinemas, for more than 40 years. He worked as a pharmacy tech for Walgreens for the last several years. Al was a member of the Society of American Magicians, and the International Brotherhood of Magicians for which he earned an Order of Merlin award, for giving 25 years or more of service to the organization. Al enjoyed magic since the age of six. He was an avid reader and collector of all things magic. He also loved visiting all of the local theme parks, including Universal Studios and Walt Disney World. He attended almost all of the Halloween Horror Nights at Universal since they began in 1991. He created a new holiday in October named “Altober” in honor of his birthday month. His favorite movie was Back to the Future Part 2. He enjoyed going to musical plays and escape rooms. He was proud of his Timehop on Facebook for the last 4 years. Al will be remembered as being kind-hearted, thoughtful, funny and creative. He loved spending time going on adventures with his wife and daughter. He was an all around great guy. Al leaves behind his loving wife, Angela, and his daughter Andrea. He is also survived by his brother Edward D’Alfonso, and his sister Roseanne D’Alfonso (Nancy) of Connecticut. The funeral service will be held on Sunday, March 27, 2022 at Osceola Memory Gardens at 1717 Old Boggy Creek Rd in Kissimmee FL. The viewing, which includes a service, will be held from 2pm to 5pm.

The family of Alfred "Al" F. D'Alfonso Jr. created this Life Tributes page to make it easy to share your memories.

Send flowers to the D'Alfonso family.